I called one of the beauty schools here in Vegas and got an interview on Friday!
Woo! I'm really excited to get back into school and get it done and over with so I can get into my career!
YAY!

Also, Im going to be turning in my resume at my mom's company today~
HOPEFULLY I get the job there u___U
I really really need one ;___;

Also I started making nails!
Like premade deco press on nails. And Im selling them, however I dont really know who would like them?

Here's an example of them
if you think you might like some, let me know!
Im up for taking requests too!

I made these, and I am selling them for 12$ (free shipping)
Please buy them T___T

Ive been on a One ok rock kick for about a week now.
I realize its been like...almost 3 years since I got to know who they were...
seems like a lot longer than that when you learn all their personalities and quirks though~
haha.
I have to eternally thank

papercloud for getting me into them
without her having a kick of her own I think I would have gotten into them a lot later than I did and I would have missed so much~
So thank you my dear Dizi~
I miss you btw ;; if you even check LJ anymore...

I recently heard a song from my childhood and thought it would be interesting to see what everyone's childhood faves were.
since we werent always into jrock/kpop lol.

These aren't really in a particular order:


Chris Cornell - Can't Change Me
This is the song that made me think of all this...

Soundgarden - Black Hole Sun
I remember that this song actually used to scare me for some reason...?

Tool - Sober
This video gave me the creeps. and Still does. Oh well.

TLC - Waterfalls
I had no idea what this song was about when I was a kid, and now that I know Im like... wow why did my mom let me listen to this.

Backstreet Boys - Everybody
I still love the shit out of this song ok.


Spice Girls - Wannabe
I actually owned this CD and I went to their concert dressed as Baby Spice. True Story.


Hanson - MMMbop
This song is forever relevant in my life.

Blackstreet - No Diggity
CLASSIC. IDC WHAT YOU SAY.

Christina Aguilera - Genie in a Bottle

Fuel - Hemorrhage (in my hands)
I used to think the singer was so hot....

Creed - My own Prison

Gin Blossoms - Hey, Jealousy
My mom and I used to sing to this while we cleaned the house XD

Weird Al Yankovic - Albuquerque
I totally knew ALL the words to this 12min song...

Michael Jackson - You are not alone
Yes. yes. and yes.

aaaaand that's all.
I need to make a playlist on my ipod....

aha! today is my 20th birthday!!
and im not doing jack shit but laying in bed ;3
i went out and partied it up yesterday.
and got drunk. teehee.
my sister called me at 8am and wished me a happy birthday so that made me really happy.
my mom and aunt called later too~
but. i think today is gonna be a good day :3
ahhhh~
i hope everyone else is having a good day too!

Posted via LiveJournal app for iPhone.

I dont know why Im so fixated on her.
I have been for years.
but things cant be the same after so long...
and no matter how much I wish they could be...they cant be.

ah, oh well.
im better off staying alone for now and focusing on myself.

anyway.
i need to remind myself to post her more
(_ _||)
i need to get my thoughts out.

school is going well.
im already gonna be out on the floor and taking clients and stuff.
yay me!
haha.
this post is so...all over the place and i apologize. /sob

i dont have much else to say besides that...
ok byyyyeeee.

Posted via LiveJournal app for iPhone.

Okay so first, I got there at like...3pm.
We went to K-town and then straight to the sheraton hotel where the boys (both CNBLUE and FTI were staying) and basically sat around waiting for them.

We'd heard someone say they'd seen FTI at the Americana mall doing some shopping, since they'd had the press conference and rehearsal before this, so we wondered if maybe the blue boys were there too.
So we sat there discussing what we were gonna do, and then this giant charter bus pulls up with a korean flag logo on it...we all froze... I looked out the window staring to see if I could identify anyone inside the bus...and there he was...
it was yong...
I looked over at my friend and whispered "it's the boys.." so I grabbed my gift and booked it to the door where they were entering from, Yonghwa walked in first (which was good for me cuz I wanted to give my gift directly to him...)
He accepted the gift with a thank you and a smile...my heart melted T____T
here's the video:

;____;
His eyes looked so sleepy and worn, his skin was the same.
his hair was a mess, and he just looked like he was ready to pass out.
but..
no matter how bad he may have looked...
my heart was racing...it was actually him the jung yonghwa.
The man that I loved and respected...sighs.

Next the rest of the boys followed behind.
The first person I ran into was Jungshin, who was wearing sunglasses, and towering over everyone else in the small lobby way.


Here's the video.
The girl behind me dropped her phone, I looked down to see if it was okay, and to make sure I didnt step on it.
Jungshin, that sweet gentle giant looks over everyone and asks in wonderful english
"Is it ok~?"
T___T perfect namja.
The managers were standing there making sure we didnt get too close to them, but I happened to see a very unhappy looking and most likely extremely jet-lagged and exhausted Jonghyun leaning against the wall, I called out his name (which you can hear in the video as well.) and his head shot up, he looked in my direction and nodded.
it was nice to have at least been acknowledged by him, even if he really wasn't at his best.
(n____n)/
As the elevator doors opened, Jungshin called out a nice little "Bye~" to all of us and left.
I didn't see Minhyuk until he was walking into the elevator sadly, but I still called out and said goodbye to him as well.

after the boys went back to their hotel room, we left back to my friends house for a few hours, planning to return to the sheraton at 6:30-7am the next day.

So first, we get there and we spot Hongki and Seunghyun, but we didnt catch any video of them,
our friend Bonnie however had brought a pigrabbit plush for him and given it to him. he accepted it gratefully and went up the escalator with it tucked in his arm.
it was cute :'3

later, Minhyuka and Jungshin were escorted down the stairs by the manager, we'd asked for signatures, but Jungshin bowed apologetically and said he couldn't.

I happened to catch a creeper video of them sitting at the table and eating though, haha.

i had to kinda hide behind the plants so the manager wouldnt catch me. lol.

but after they had gotten up to leave, Jungshin went first and Minhyuk kinda lagged behind a little, so the manager went back to make sure he was coming and not being swarmed by fans, but Jungshin kept walking...so we took the opportunity to swarm him instead kekeke.
I got him to sign my "In my head" album. 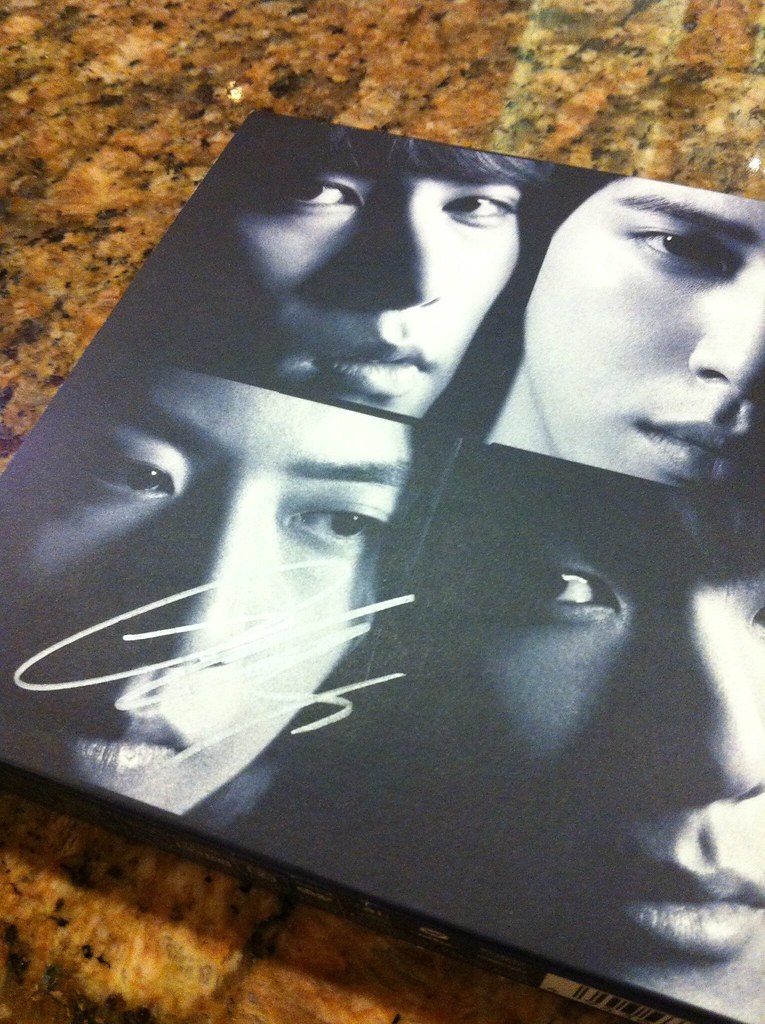 >< ♥
i was so happy.
After he finished signing and handed it to me i thanked him in japanese and he laughed a little. not in a bad way, but a happy laugh.

we waited around a little more and saw them again:

they were just going back to their room from the Gym i guess, but we followed them up the stairs.
i was literally walking side by side with Jungshin and i had a horrible urge to touch his arm since he was sleeveless LOL
but i resisted...I was trying to get an autograph from Minhyuk since my bff is a really big fan of him, but too many people were in my way ;;
so i didnt get it.
T___T

we waited around more and what do you know:
(copy&paste from tumblr)
The day before the show, my friends and I were on a hunt for the boys.

I was running out of steam since i had barely slept the night before, but something amazing happened!!!

My friend called for me to run upstairs in the lobby, and who else appeared than Yonghwa, Jonghyun alongside Hongki.

I guess they had just gotten back from the gym since they were wearing work-out type clothes. all three were wearing wife-beater tank tops, and jersey pants or sweats (yonghwa)
Earlier a friend in our group had handed hongki a pig rabbit doll, and when he came back from the gym he was still holding it, so that was cool :3
My friend Tammy approached Yonghwa and asked for a signature, but the manager told him no, so he just apologized and declined her.
not his fault :/

Jonghyun was laughing at Yonghwa for being such a loser and hiding behind Hongki to cover his makeup-less face.
Hyun’s arms were pretty much epic and glorious btw *A*
All of them were sweaty so you could see it on their skin, and i was just like

Anyway, yong’s hair was like…mom hair L O L. split in the middle and sticking up.
Obviously he hadn’t done any self maintenance since he got up, but he was really adamant about hiding his face from the fans. (I think it’s because he wasnt sure if they were recording or taking pics or something)
Hongki was saying something in korean that I couldnt understand to Jonghyun while they were waiting for the elevator to finally come down, but he had this ridiculous smile on his face LOL. So im guessing it was something like “OMG WHO KNEW WE WERE SO POPULAR!!” lol.

but once the elevator came, hyun and hongki just stepped into it. but yong was still looking away from the crowd and looking at the other elevator, so it took him a second to realize he had to get in the other one, but once he did he ducked down so his hair covered his face.

I giggled because he really did look flawless.

…is my bias showing?

so...that was the last we saw of the boys in the hotel.
i'll post an actual concert fanacct tomorrow == im tired haha.
hope you were able to live a little thru my words ^^;

its not ok to be this perfect, ok.
ugh.
he is like...more perfect than perfect.
I cant wait to see him rocking the fuck out on that stage on friday T____T
this is still so unreal /SOB
Collapse